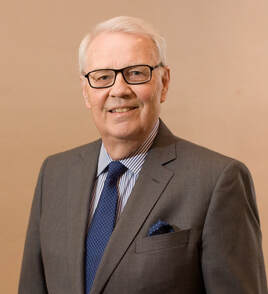 Robert Thompson is a retired business executive and lawyer. A native of Saint Paul,
Minnesota, he served as a lieutenant in the U.S. Army from 1968 through 1970.
Following his Army service, Robert earned a law degree and entered private law
practice in Saint Paul. For 32 years he was employed by Novartis, a multinational
pharmaceutical company based in Switzerland, first as a junior member of the legal
department in Minneapolis and eventually as Executive Vice President and General
Counsel of Novartis Corporation in New York, the holding company for Novartis’s U.S.
operations. In addition to leading a legal department of about 75 lawyers, he was
responsible for the tax and insurance functions and for the government relations office in Washington, D.C. In Washington he also chaired the Novartis Political Action
Committee and was a board member of the Organization for International Investment (OFII), an association of U.S. subsidiaries of non-U.S. companies. At various times Robert served as interim CEO and interim CFO of Novartis Corporation.

Beginning in 2001 Robert was Vice Chairman and Managing Director (chief executive officer) of Novartis India Limited, the headquarters for Novartis’s operations in India. Novartis India Limited is a publicly traded company (Bombay Stock Exchange), located in Mumbai. Robert concluded his Novartis career in Cambridge, Massachusetts, as one of the executives who there established Novartis Institutes for BioMedical Research, Novartis’s global research organization (relocated and expanded from Basle, Switzerland).

After retiring from Novartis in 2006, Robert continued as a consultant to Novartis International Pharmaceutical Ltd., a finance company in Bermuda. He also became Of Counsel to Lindquist & Vennum, P.L.L.P., a large Minneapolis law firm (now the
Minneapolis office of national law firm Ballard Spahr LLP), where he continued to practice in the areas of mergers & acquisitions, securities law, corporate governance, and antitrust law. He retired from that firm in 2012 and moved to Tucson.

Robert has served as a board member of Tucson Committee on Foreign Relations, Inc. since 2014, including four years as president. He currently chairs the board’s Finance & Governance Committee.

Robert is a graduate of New York University (LL.M.), the University of Oregon (J.D.), and Macalester College (B.A.) and is licensed to practice law in New York and Minnesota.