Saving the 4th Estate:
How Did It Become the Enemy of the People?
with
Mr. Leonard Downie Jr. 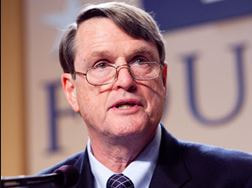 The days of multiple newspapers in our cities, three major TV networks with Walter telling us “the way it was,” and radio dominated by comedy and mysteries are distant memories. What is now defined as news media has proliferated into confusing and often unrecognizable sources on social media and cable networks.

Donald Trump began his three-pronged attack on the mainstream media through Twitter, Fox News, and right-wing radio, accusing them of being the enemy of the people and dealing in “fake news.” It is impossible to know the long-term effects of his inflammatory rhetoric. Trump became the de facto assignment editor, and the media magnified his insults. From Trump’s point of view, this toxic cynicism amounted to mission accomplished. The entire point of his disparagement was preemptive self-protection, as he admitted shortly before the 2016 election, according to CBS’s Lesley Stahl: “I do it to discredit you all and demean you all, so when you write negative stories about me, no one will believe you.”

His strategy morphed into a political weapon with ruinous effects, culminating in the disastrous and transformative January 6th assault on the nation’s capital.

To assess the future of a divided nation living in a divided media world we welcome Mr. Leonard Downie Jr. He is currently the Weil Family Professor of Journalism at the Cronkite School at Arizona State University and was the former executive editor and vice president of The Washington Post. During his 44 years in the Post newsroom, he was also an investigative reporter, editor on the local and national news staffs, London correspondent, and, from 1984 to 1991, managing editor under then-executive editor Ben Bradlee. As deputy metro editor from 1972 to 1974, Downie helped supervise the Post’s Watergate coverage. He also oversaw the newspaper’s coverage of every national election from 1984 through 2008. During his 17 years as executive editor, The Washington Post won 25 Pulitzer prizes.