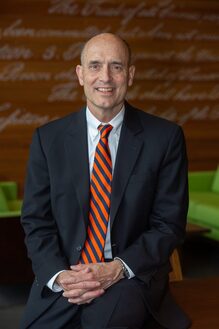 China’s State Council has declared that China will be the world’s leader in Artificial Intelligence by 2030.  The Chinese government has committed $150 billion to achieve this goal.  Stephen Hawking called AI “either the best thing to ever happen to humanity or the worst.”  Not to be outdone, Vladimir Putin has stated that “whoever becomes the leader in this sphere [AI] will become the ruler of the world.”  AI will be as transformative of military technology as aviation and nuclear weapons a leading 2017 Belfer Center/IARPA study concluded.  What is AI?  What are its security uses?  What are its security risks?  On what timeline will this occur?  Considering these realized and potential uses and risks, in what manner should law, ethics, and policy regulate the security uses of AI?  And, for our immediate purposes, what is it that public citizens - like us - should know about this AI revolution?

To discuss this important question, we've invited the Honorable James E. Baker to address the members of TCFR.

James E. Baker is Director of the Syracuse University Institute for Security Policy and Law, a Professor at the Syracuse College of Law and the Maxwell School of Citizenship and Public Affairs, and a Distinguished Fellow at the Georgetown Center for Security and Emerging Technology, Georgetown University.  He previously served as a Judge and Chief Judge on the U.S. Court of Appeals for the Armed Forces. The USCAAF is a federal civilian court that hears cases arising in the military justice system.  Appeal from the court is to the Supreme Court of the United States. Baker also served as a presidential appointed member (Obama) and Acting Chair of the Public Interest Declassification Board.

As a career civil servant, he served as Legal Adviser and Deputy Legal Adviser to the National Security Council. Baker has also served as Counsel to the President’s Foreign Intelligence Advisory Board and Intelligence Oversight Board, an attorney in the U.S. Department of State, an aide to Sen. Daniel Patrick Moynihan, and as a Marine Corps infantry officer. In 2017-18, Baker was the Robert E. Wilhelm Fellow at the Center for International Studies, MIT. In addition to teaching at Syracuse University, Baker has taught at Yale, Iowa, Pittsburgh, Washington University (St. Louis), and Georgetown.  He is the author of numerous articles and three books: The Centaur’s Dilemma: National Security Law for the Coming AI Revolution (Brookings 2021); In the Common Defense: National Security Law for Perilous Times (Cambridge 2007); and, with Michael Reisman, Regulating Covert Action (Yale 1992).