U.S. - China Relations After the Election
with
Dr. David Lampton 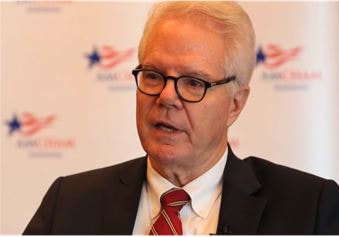 The U.S.-China Relationship is in deep trouble, and while much could change after the election, many things will not change. Among the things that will not necessarily change are politics and leadership in China, the broad array of American interest groups that argue for more reciprocity in dealing with China, and deeply skeptical public opinion in America. Our challenge is to recognize the need for working with China to solve a range of issues that include the pandemic, climate change, economic programs, and conflict resolution in the South China Sea. No diplomatic equation works without China.

In his remarks, Dr. Lampton will consider outcomes of the presidential election, changes in Congress, and how China is responding to the likely future course of Sino-American relations."

Dr. Lampton is Hyman Professor and Director of  China Studies at the Johns Hopkins School of Advanced International Studies. Formerly President of the National Committee on United States-China Relations, he is the author of many books including, The Three Faces of Chinese Power: Might, Money, and Minds, with prior publications appearing in: Foreign Affairs, Foreign Policy, The American Political Science Review, The China Quarterly, The New York Times, The Washington Post, and many other venues popular and academic in both the western world and in Chinese speaking societies. He received his BA, MA, and PhD degrees from Stanford University.  His newest book, Following the Leader: Ruling China, from Deng Xiaoping to Xi Jinping, was published in January 2014.​


Zoom Event
Online conference details will be shared with registered participants before the event.