Foreign Policy in the Trump Era
with
Ambassador Nicholas Burns 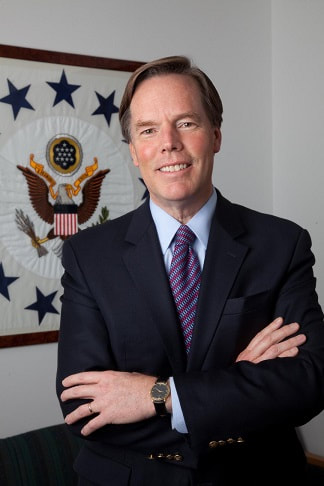 At the State Department during the Trump Administration, there have been substantial budget cuts, a reduction in personnel and a decline in traditional multilateral diplomacy. Do these developments assure that future administrations will inherit a diminished and dysfunctional Department of State? Will they make it more difficult to secure U.S. interests abroad and result in the  erosion of U.S. influence?

Ambassador (ret.) Nicholas Burns will discuss these issues and the major trends challenging global peace and stability including a weakening U.S. leadership role, the U.S.-China competition for power in the Indo-Pacific and an updated analysis of the North Korea nuclear crisis.  He will also examine prospects for stability in the Middle East and Europe as well as the deepening political crisis in the U.S.

Ambassador Burns served in the United States government for twenty-seven years.  As a career Foreign Service Officer, he was Under Secretary of State for Political Affairs from 2005 to 2008; the State Department’s third-ranking official when he led negotiations on both the U.S.–India Civil Nuclear Agreement and a long-term military assistance agreement with Israel; and was the lead U.S. negotiator on limiting Iran’s nuclear program. He was U.S. Ambassador to NATO, Ambassador to Greece and State Department Spokesman.  He worked for five years on the National Security Council at the White House where he was Senior Director for Russia, Ukraine and Eurasia Affairs and Special Assistant to President Clinton and Director for Soviet Affairs in the Administration of President George H.W. Bush. Ambassador Burns has received fifteen honorary degrees, the Presidential Distinguished Service Award, and the Secretary of State’s Distinguished Service Award.