Will COVID Change the World?
What Impact will COVID Have on U.S. -China Relations?
with
James B. Steinberg, J.D. 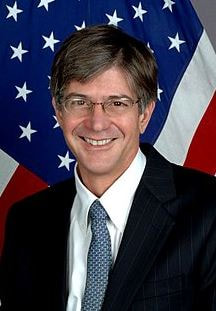 The COVID-19 virus might have been expected to foster a new appreciation of the importance of international cooperation to address this quintessential transnational challenge. Yet the experience has been at best mixed; while there have a been a few cooperative initiatives (the COVAX vaccine fund, the G-7, G-20, ASEAN, to name a few); much of the response has been nationalistic and protectionist, as nations scramble to protect their own populations and blame others for the persistence of the pandemic.

Nowhere is the more evident than the impact of COVID on US-China relations. COVID has exacerbated increasingly adversarial US-China interactions, from disputes over the origins of the disease to the use of “vaccine diplomacy” to win international support.

But these are short-term responses; what impact will COVID have over the long term? Will it lead to strengthened international institutions and a greater awareness of how far away events can have a large impact? Or are we in for a long term retreat from globalization and interdependence?

To address these questions we've invited the Honorable James B. Steinberg is Dean, Nitze School of Advanced International Studies (SAIS), Johns Hopkins University. Prior to his SAIS appointment, he was University Professor of Social Science, International Affairs and Law at Syracuse University, and he was Dean of the Maxwell School from July 2011 until June 2016. Steinberg also served as Deputy Secretary of State, the principal deputy to Secretary Hillary Rodham Clinton, from 2009-2011. From 2005-2008, Steinberg was Dean of the Lyndon B. Johnson School of Public Affairs. From 2001 to 2005, Mr. Steinberg was vice president and director of Foreign Policy Studies at the Brookings Institution.

Mr. Steinberg was deputy national security advisor to President Clinton from 1996 to 2000. During that period he also served as the president’s personal representative to the 1998 and 1999 G-8 summits. Prior to becoming deputy national security advisor, Mr. Steinberg held positions as director of the State Department’s Policy Planning Staff, and as Deputy Assistant Secretary for Analysis in the Bureau of Intelligence and Research. He is the recipient of the Joseph J. Kruzel Memorial Award, American Political Science Association (2014), the CIA Director’s Medal (2011) and the Secretary of State’s Distinguished Service Award (2011).

Steinberg’s most recent books are A Glass Half Full? Rebalance, Reassurance and Resolve and  Strategic Reassurance and Resolve: US-China Relations in the 21st Century (both with Michael O’Hanlon  Recent book chapters include “Present at the Recreation: The Role of the State Department in Formulating and Implementing US Global Policy” in Nicholas Burns and Jonathan Price, eds., America’s National Security Architecture (Aspen Institute, 2016); “United States: Grappling with Rising Powers” in William I. Hitchcock, Melvyn P. Leffler and Jeffrey W. Legro, eds., Shaper Nations: Strategies for a Changing World (Harvard University Press, 2016) and “History, Policymaking, and the Balkans: Lessons Imported and Lessons Learned” in Hal Brands and Jeremi Suri, eds., The Power of the Past, History and Statecraft, (Brookings Institution Press, 2015). He has also authored Difficult Transitions: Foreign Policy Troubles at the Outset of Presidential Power (Brookings 2008) with Kurt Campbell.

Mr. Steinberg received his A.B from Harvard College and a J.D. from Yale Law School.