Afghanistan: How and When Do We Disengage?
with
Dr. Stephen Biddle 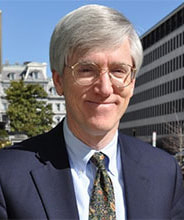 America has been at war in Afghanistan for 18 years, our nation’s longest war costing 2,400 American lives and more than $800 billion with annual funding remaining at $45 billion. For the people of Afghanistan, the suffering has been even worse—They have been at war for 40 years dating back to the 1979 Soviet invasion.

The U.S. role in the war is now greatly reduced, focusing on training, logistical support and counter terrorism. But the fighting continues, posing important challenges for Afghan security forces. Can they hold in the face of growing Taliban offensives? Can the Afghan political system overcome its internal divisions and corruption problems to offer a viable alternative to the insurgency? What role will Pakistan play? Will Ambassador Zalmay Khalilzad’s ongoing efforts to negotiate a peace settlement with Taliban leaders succeed? And considering all this, what is now achievable in Afghanistan, and what further American contribution makes sense to achieve it?

To address these questions and examine what lessons for the future can be drawn from our experience in Afghanistan, we welcome Dr. Stephen Biddle.

Before joining the Columbia University faculty, he was Professor of Political Science and International Affairs at George Washington University, and previously held the Roger Hertog Senior Fellowship in Defense Policy at the Council on Foreign Relations, and the Elihu Root Chair in Military Studies at the U.S. Army War College, as well as teaching and research positions at Harvard University's Belfer Center for Science and International Affairs, the University of North Carolina at Chapel Hill, and the Institute for Defense Analysis.