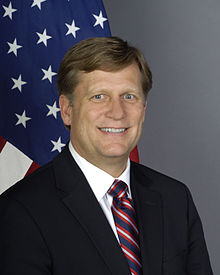 No institution has been more severely damaged than the Department of State by the previous administration’s attack on “deep state” enemies. The results have been unilateral diplomatic disarmament with massive budget cuts and hemorrhaging of personnel. Institution crippling was matched by functional disarray with attacks against allies, alliances, and international organizations.

The Biden administration and his new Secretary of State Anthony Blinken, have reversed these trends, making diplomacy and alliances a center piece of the Biden Foreign Policy initiatives. What is being done and how long will it take to repair the damage to both the institution and its functions?  To assess these complex questions, we welcome Ambassador Michael McFaul.

Michael A. McFaul is the Peter and Helen Bing Senior Fellow at the Hoover Institution as well as a professor of political science, director and senior fellow at the Freeman Spogli Institute for International Studies at Stanford University. He also currently works as a news analyst for NBC.  His areas of expertise include international relations, Russian politics, comparative democratization, and American foreign policy.

From January 2012 to February 2014, he served as the US ambassador to the Russian Federation.  Before becoming ambassador, he served for three years as a special assistant to the president and senior director for Russian and Eurasian Affairs at the National Security Council.

He has authored and edited several books including, From Cold War to Hot Peace (2018). His op-eds have appeared in the New York Times, the Wall Street Journal, the Washington Post, Politico, Time, and the Weekly Standard.